PETE GOSS - AUTHOR OF THE BEST SELLING BOOK: 'Close To The Wind' 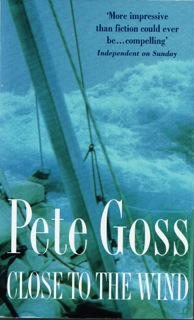 On November 3, 1996, former Royal Marine Pete Goss embarked on the most grueling competition in his sailing career, the Vendée Globe, a nonstop, single-handed round-the-world yacht race.

For the next seven weeks he met every challenge in his stormy path, from combating waves the height of six-story buildings to grappling with his spinnaker in high winds.

Suddenly everything began going wrong: His sails were destroyed, his navigation equipment proved useless. And then on Christmas Day his radio picked up a Mayday that a French competitor was sinking 160 miles away.

Turning into the hurricane-force winds, Goss set out to rescue a near-dead man on a life raft somewhere in the vast wilderness of the merciless southern ocean.

How he did it makes this extraordinary tale as amazing as it is thrilling.

Signed books can be ordered for dinners and conferences, please contact us for further information.