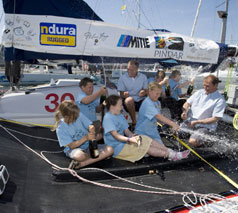 The kids visiting PFS in Lowestoft. 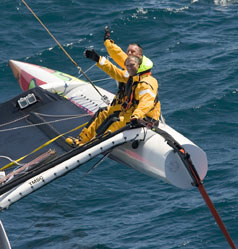 Permanent fixtures on the winward hull eating, sleeping and sailing round Britain. 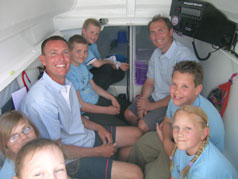 Round Britain and Ireland 2006

Pete Goss was excited to be back out on the water with long-time friend and former Team Philips crewmate, Paul Larsen. The duo came together once more to tackle the 2006 Shetland Round Britain and Ireland Race, being the ninth boat to cross the finish line from an original fleet of 40. It was only a three-day set back to repair boat damage that prevented them from winning – at one stage they were a day ahead of the rest of the fleet.

However, the goal of their entry was to raise £20,000 for Cornwall Playing for Success, of which Pete is a founding Trustee. In fact they more than doubled that and enabled CPfS to build a permanent new centre at Pothpean.

The RB&I is a tough and gruelling challenge held every four years, and is designed to put the short-handed sailor’s seamanship skills to the test – much more so than its transatlantic counterparts. Usually, when the weather deteriorates, the sailor stands offshore in deeper water but this is not possible when the course is around our islands. With drastic weather changes and large tidal ranges, the race is accepted as a unique 2000-mile challenge. Two-handed sailing has been described as single-handed sailing with time off, but racing in the Seacart 30 meant that sleep-time was spent dozing on the windward outrigger to ensure that this lightweight catamaran remained powered up.

Along the way, there were four compulsory pit stops of forty-eight hours - at Kinsale, Barra, Lerwick and Lowestoft. These stops provided the opportunity for competitors to rest, make repairs and study the next leg’s tactics and weather- although there’s always time for a few beers with the other competitors, making this an unusually social race.

The race fleet was made up of between forty and fifty boats, ranging from 30’ to 50’ in length. The RB&I is always a terrific test of endurance and seamanship, and not for the faint-hearted. You can find more information about the race at www.rwyc.org.

Below ~ Video of the kids at the launch of PFS