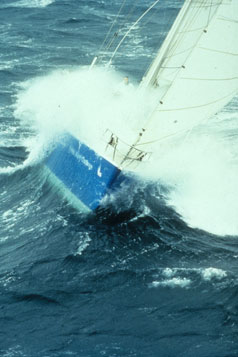 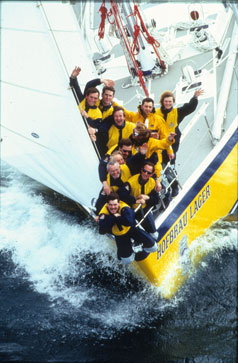 Pete’s other sailing exploits include training and leading a previously inexperienced crew of fourteen through what is generally held to be ‘the world’s toughest yacht race’ – the British Steel Challenge (now known as the Global Challenge).

The route goes the ‘wrong way’ around the world, against the prevailing winds and currents. The criteria for the race was to construct ten identical boats all to be crewed by novice sailors and Pete whittled down the entrants to 120, then split them into ten teams of 12.

Pete spent three years as training skipper for the whole fleet of 120 amateurs, working alongside them day and night to ensure they understood every aspect of their particular boat and were fully prepared for the challenges they were about to face.

It was thanks to this incredible passion and attention to detail that Pete proudly went on to lead his own team of 12 into third place aboard their boat Hofbrau.