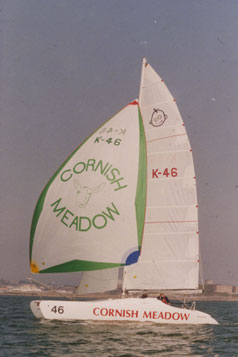 In 1988 Pete defied convention by finishing second in class in the Carlsberg Single-Handed Transatlantic Race, sailing ‘Cornish Meadow’, a tiny catamaran just 26 feet in length. This was Pete’s first fully-sponsored project, which, by coming in ahead of many larger craft, he used to prove that small, lightweight multi-hulls can be viable giant-killers!

Pete had to dump a year’s work after realising his initial choice of boat - a Sadler Barracuda - was too expensive a proposition for sponsors. So determined was Pete to participate in the race, he sent out a total of 2,500 sponsorship proposals, to no avail. His determination finally paid off and he left the start line, seemingly against all odds.

Pete had a fantastic race, feeling completely at ease as he settled into getting his tiny boat across the Atlantic as fast as he could, with his mums’ fruit cake – which he never goes to sea without – to keep him company.

Pete endured some serious weather conditions but, after a private, friendly race with fellow competitor Gerard Montarial (Pete just pipped him to the post!), Pete was delighted to cross the finish line in 35th place out of 95 competitors, coming in second in class. He had proved his point that a small catamaran was more than up to the task of such a race. Pete has gone on to use that same ethos to race the small, lightweight multihull Cornwall Playing for Success in the Round Britain and Ireland and Fastnet yacht races.