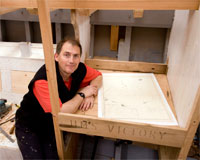 Pete will skipper the boat. As an experienced sailor, keen woodworker and proud of his West Country roots, this was the perfect project for him. 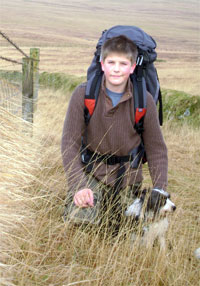 Eliot Goss is Pete’s youngest son. He will be 14 when Spirit of Mystery sets sail. He is completing a training programme to prepare him for the gruelling challenge ahead, including the Ten Tors, which will help him build his endurance and improve his navigation.

Eliot will complete the first part of the voyage from Newlyn to South Africa and if that is successful he will complete the second leg through the infamous Southern Ocean. Whilst it will be an amazing adventure and learning experience for him, he is not getting away from work completely. He has the support of his school and will complete his coursework under the watchful eye of his Uncle (a fellow crew member and supply teacher) Mark Maidment.

Where able, Eliot has been involved in the project from logging to lofting out and painting the boat. 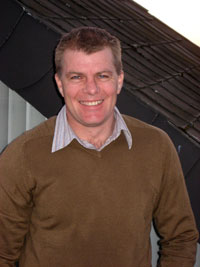 Mark Maidment spent 14 years in the Royal Navy and served on several ships and submarines before leaving to become a teacher of mathematics. After a short spell of teaching he realised that he did not wish to spend the rest of his working life in a classroom and so he joined the local constabulary.

He has been a police officer for nearly eight years and works as a neighbourhood team leader in the West Sector of Plymouth.

Mark will be taking a few months unpaid leave to complete this trip and is fortunate to have a very supportive wife. He has been married to Gina for 23 years and they will hopefully be celebrating their 24th Anniversary in Cape Town. Mark is no carpenter but has been spending some of his days off in Millbrook helping out at the yard, which he says is a release from the frustrations and bureaucracy of modern life. 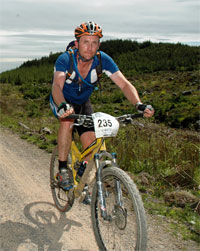 Andy Goss is no stranger to water, having been a project engineer for British Waterways for the last eight years and prior to that an engineer for South West Water. The trip will be a return to his birthplace as Andy was born in Swan Hill, Australia and worked in Melbourne – Spirit of Mystery’s destination.

He is also well-qualified to be on the crew as he is a former cabinet maker with experience of refitting an 80 foot prawn trawler.

Andy is a keen sailor and loves adventure having travelled extensively worldwide and competed in mountain-biking, fell running and canoeing competitions. He is also going to be popular in board as he is a dab hand in the kitchen, especially with Thai, Indian and Italian Cuisine.

He says that he is delighted to be involved with the project as it connects his spiritual home, Cornwall, with his birthplace, Australia.

Spirit of Mystery is being built by Chris Rees (who is also her principal designer), John Albrecht and Andy Grieve.