Aqua Quorum was the first British boat to enter the Vendee and the only new yacht to complete the course in a year which sadly claimed the lives of two sailors, with only six of the sixteen starters finishing the race. Subsequent races have to stay further North in the Southern Ocean as they round 'safety waypoints'. With a revolutionary swing keel she was shunned by many as a flawed design, but she went on to be the standard by which future Vendee boats would be based. Pete was the fastest single-handed sailor at the time.

The race turned Pete into a national hero overnight for the dramatic rescue of fellow competitor Raphael Dinelli in hurricane-force winds. Pete, who scuppered his own chances of winning the race in order to save Dinelli, was awarded the MBE by HM The Queen and the Legion d'Honneur by the French President for his actions.

Up against much bigger and better funded vessels, Pete had risked everything – including his family home – to get to the starting line.Separated from his wife and three children for months on end, Pete knew he would have to draw upon his vast experience and summon all his self-belief to complete the race. An onboard fax machine gave him that all-important link home and kept his spirits up.

Events took a dramatic turn for the worse in the notoriously hostile environment of the Southern Ocean when winds of up to 80mph pounded Frenchman Raphael Dinelli’s sinking boat. After receiving the distress call, Pete sent what may have been his last fax to his wife to explain what he was about to do and immediately turned round to rescue the Frenchman. He battled for two days to reach the near-dead Dinelli, who was extremely lucky to survive 48 hours in a freezing life raft.

Pete now became nurse to Dinelli, who suffered from hypothermia and was so stiff with cold he could not move for days. Pete made him sweet tea and gave him physiotherapy while he made his slow recovery. The pair became firm friends, vowing to sail together and toasting their future on New Year’s Eve with a bottle of champagne Dinelli had had the incredible foresight to bring aboard! Dinelli, realising what was important to him after his ordeal, asked his girlfriend to marry him using Pete’s fax machine and – after she accepted - asked Pete to be best man at his wedding. They have since competed together as co-skippers in the Transatlantic Jacques Vabre Race in 1997, winning in their class.

Pete’s single-minded determination to finish the race became clear when he was forced to perform self-administered surgery at sea after rupturing muscles in his already painful and swollen elbow. Without anaesthetic and following basic instructions from a surgeon over the radio, Pete sanitized a scalpel, cut into the flesh and drained off the excess liquid. Thankfully the wound saw no sign of infection and Pete continued to sail his heart out, becoming the fastest British sailor to sail single-handedly round the world in 126 days and 21 hours.

Pete is the author of the best-selling book about his yachting adventures – ‘Close to the Wind’, where Pete shares his adventures, thoughts, hardships and philosophy during and throughout the ten years of preparation for the 1996 Vendee Globe. Close to the Wind is published by Headline Book Publishing (1998).

You will soon be able to order a copy of the book through the website. 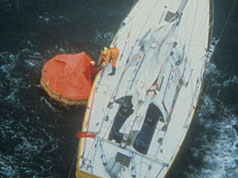 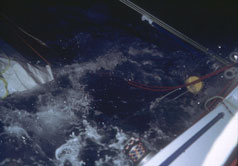 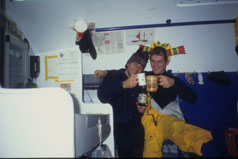 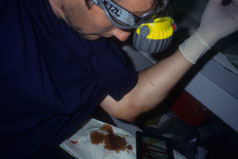 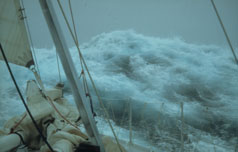