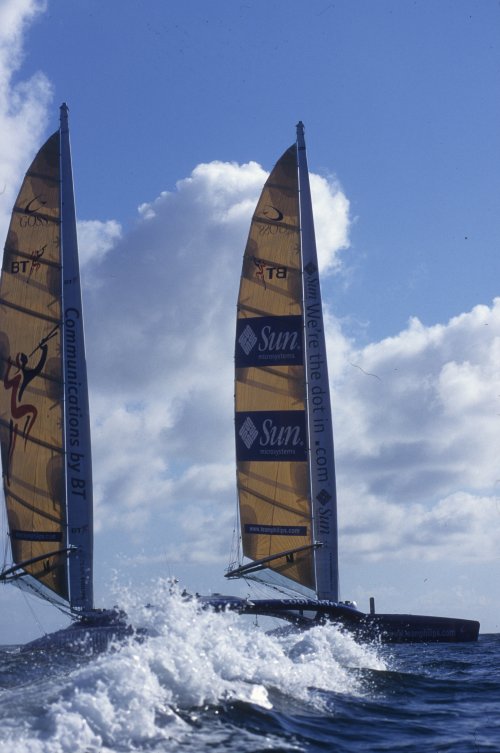 ONE of the few remaining sections of the world-famous Team Philips catamaran – a piece of living history – goes on sale today (Friday, February 25) to raise cash for charity.

A&P Falmouth, which has been home to the section of hull for the past four years, has decided to auction it on eBay in aid of ShelterBox.

The giant catamaran, built to take yachtsman Pete Goss on a non-stop dash around the world, was abandoned during a freak mid-Atlantic storm in December 2000. Only parts of the wreckage were salvaged.

Mike Reynolds, Port Operations Director at A&P Falmouth, said: “Although it may be difficult for someone to take ownership of this section of the hull it would be a real shame to see it broken up.

“I remember seeing it being built in Totnes and then sailing down the River Dart with a lot of hopes riding on it. Many of the people who had that hope have their names printed on this area of the hull.

“We all know the story of how it met its end but this piece, maybe the last significant part, has been seen by thousands who are all fascinated by that story. I hope someone comes forward to buy it and in the process save some modern history and raise funds for ShelterBox.”

The section of hull has been a tourist attraction on the quayside at Falmouth Docks, after it was donated to the town following a successful exhibition at the National Maritime Museum Cornwall.

It has generated considerable interest over the years but is now looking worse for wear. Rather than cut up this piece of modern history, with the permission of Pete Goss, it is now being offered for sale on eBay with the hope that someone has sufficient interest, and room, to keep it.

Pete Goss said: “It is fantastic that A&P Falmouth is respecting the essence of Team Philips. If through finding a new home for Team Philips we can provide a home for people who have suffered through ShelterBox, I couldn’t think of a nicer end for this piece of vessel which has been such a huge part of my life. ”

All proceeds from the sale will be donated to the international disaster relief charity ShelterBox.