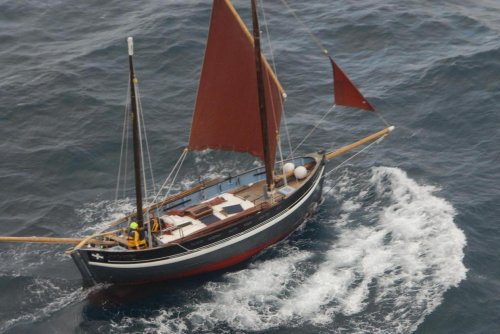 This is a news update concerning the ongoing situation with the Spirit of Mystery, which was knocked over by a large wave at about 23.30 hours GMT on Tuesday 3rd March (0930 hours boat time Wednesday 4th March) about 300 Nautical Miles South South-West of Kangaroo Island off Adelaide, South Australia.

Spirit of Mystery is currently making her way towards Portland on the South Coast of Australia. It has been decided not to attempt a helicopter transfer of the casualty, Mark Maidment, for two reasons: Firstly, Mark’s condition is stable and comfortable; and secondly, helicopter transfers carry their own risks, especially in rolling seas. Usually a casualty would be transferred to a life raft and towed behind the vessel, from which a helicopter can winch the crewman to safety. However, the life raft has been lost in the knock down that caused the injury and damage.

Responsibility for the operation has been handed back from AMSA to the Victoria Police Rescue Coordination Centre. The intention is for Spirit of Mystery to continue towards Portland where Mark will be taken off the vessel and receive medical attention to his broken leg.

It is the crew’s intention to continue towards Melbourne where they hope to arrive on Tuesday 10th March. Mark (44 years old and a serving Police Officer in the UK) has made it clear he wants the crew to finish their voyage.

Pete Goss (47) is the skipper of the boat that is re-enacting (with his crew comprising of his younger brother Andy (40), Pete's son Eliot (14) and brother in law Mark Maidment) the journey of seven Cornishmen who made the journey from Cornwall in the UK to Williamstown, Victoria to seek out a new life in the gold fields of Victoria 154 years ago. Pete is no stranger to the dangers of the Southern Ocean – he was awarded the MBE and Legion D’Honneur following his dramatic single-handed rescue of fellow competitor Raphael Dinelli in the 1996/7 Vendee Globe race.

Pete said: “It is a great shame that Mark is unable to complete the voyage with us and we will miss him terribly the moment he is taken off the boat. But it is his wish that we continue to Melbourne, where we hope to see as many boats as possible come out to guide us in to Williamstown.”

Mark is determined to be fit and able enough to be there himself to greet his fellow crew members.

People can follow events as they unfold on the project website: www.petegoss.com, which features a daily blog, satellite tracking system and regular news updates. Members of the public are welcome to come down to the Royal Victoria Yacht Club to meet the crew and further details will be posted on the website in due course.

Members of the public can hear all about the adventures of the crew at a Talisker Tales event on Thursday 19th March 2009 at the Royal Yacht Club of Victoria. Details are available on the website.