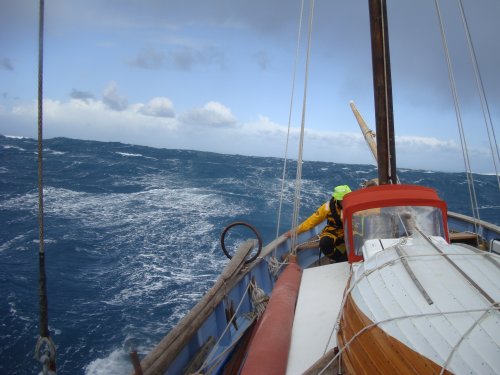 This is a news update concerning the Spirit of Mystery, the 11 metre wooden lugger that was knocked over in the Southern Ocean on Tuesday morning injuring crewman Mark Maidment.

Mark was taken off the boat at Portland yesterday and airlifted to the Alfred Hospital in Melbourne, where he underwent an operation to his broken right leg. He is now resting comfortably in hospital after a rod and pins were attached to his tibia. Mark hopes to be released tomorrow in time to meet his colleagues who are due to arrive in Williamstown between 1.30 and 3.30 pm.

The winds have been much kinder to Spirit of Mystery since the knock-down, which is expected at Port Phillip Heads between 5.00 and 6.00 am tomorrow, Monday 9th March. It is hope that a flotilla of small boats will meet the vessel between Point Gellibrand and Fawkner Beacon and follow her into the Royal Yacht Club of Victoria (120 Nelson Place, Williamstown) where she is due to arrive between 1.30 and 3.30 pm.

Members of the public are invited to come down to the Yacht Club and watch as Spirit of Mystery completes her five month and 11,800 mile voyage. The crew, comprising of skipper Pete Goss, his younger brother Andy and Pete’s 14 year-old son Eliot will be welcomed to Melbourne by VIP guests including the Mayor of Hobsons Bay, Peter Hemphill and the President of the Cornish Association of Victoria Derek Trewarne.

Pete Goss said: “The emergency services have been fantastic and we have been so well looked after by all the Australians who have been involved with the project. We hope to see lots of boats out to welcome us in and can’t wait to shake as many hands as possible when we come alongside.”

Mark Maidment said: “Obviously I am disappointed that I won’t be on board as she sails in, but I am looking forward to being reunited with the crew after all we have been through together.”

The vessel’s progress can be monitored on the project website: www.petegoss.com.

A boat will be available to media photographers at the Royal Yacht Club of Victoria at 12 midday to meet Spirit of Mystery at sea and escort her into the marina.

Pete Goss and the rest of the crew will be available for interview at the yacht club shortly after arrival.