PETE GOSS AND ANDY WARRENDER TAKE ON THE NORTH SEA ... BY KAYAK 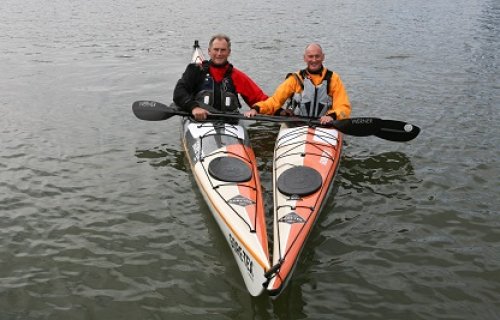 Two men have announced plans to attempt a crossing from Scotland to Norway by sea kayak this summer.

Pete Goss MBE and Andy Warrender will voyage non-stop for up to four days as they attempt to complete the ‘GORE-TEX® Guillemot Challenge’.

A feat that has been tried before but never completed, the pair hopes to prove that with impeccable design, planning and equipment, plus the spirit of adventure, you can achieve something great.

They will set off from the most easterly point of the Shetland Islands at some point in June or July, only leaving when the perfect weather window arises. Their homes for the next 320km (just under 200 miles) will be two production kayaks that have been specially adapted for the challenge with the help of some of the finest engineers in the country from the GORE-TEX® brand.

The equipment they use will stand testament to the evolution of sport as their hybrid approach marries the best of kayaking and sailing, paying homage to a long chain of on-water innovation that goes right back to the first inuit.

They have been preparing for the challenge for well over a year and can now reveal that their recent circumnavigation of Tasmania was a key part of their training for the GORE-TEX® Guillemot Challenge.

Safety is in the planning and the most important part of their preparation is in building and testing their equipment. Pete and Andy are backed up by a team of around 10 experts from Gore (W.L. Gore & Associates), which is sponsoring the challenge. While the GORE-TEX® brand may be best known to most for its fabrics, its engineers worldwide work across a range of industries including aerospace, automotive, energy and even military. The GORE-TEX® brand is bringing its experts from across a wide range of areas to create the ultimate backup and R&D team for Pete and Andy, designing bespoke GORE-TEX® fabrics to keep the pair warm in the elements, spray decks, shelters and seating.

Pete Goss MBE said: “It would be very easy to fail at this and we don’t choose to rely on luck. For us, the way to make this safe is to ensure the preparation is there. Eighty per cent of what will keep us safe will be done before we dip our paddles into the water.”

The adventure has been named the GORE-TEX® Guillemot Challenge in a nod to the voyage of Scotland’s guillemot chicks, some of which swim right across the North Sea to Norway not long after hatching.

Andy said: “We thought, if they can do it, why can’t we? We know it’s going to be no easy feat and it will be completely different to our Tasmania circumnavigation in that it will be non-stop but we are confident that we can not only make the crossing, but make it safely.”

Antonio Grippo, Gore, added: “We are passionate about adventure so leapt at the chance to support the attempt and keep Pete and Andy safe. It has been great fun for us to apply our expertise of research and development to something so unique and we know the clothing we have supplied will play an important part in helping the pair achieve this world first.”

Pete and Andy will blog about their adventure. To follow the team’s progress visit the tracker at http://www.petegoss.com/tracker.php.