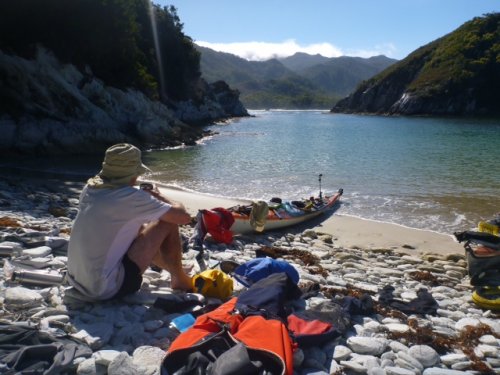 Pete Goss and Andy Warrender have rounded the Southern Capes of Tasmania that mark the halfway point in their 1500 km circumnavigation of the Australian island state by sea kayak. Despite tough conditions that could have ended their voyage early, the paddling pair are continuing their voyage.

Pete said he was elated to round the southernmost point of the island: “We could not have had a more dramatic end to what has been an amazing experience as we have pulled ourselves, arm over arm down the west coast of Tasmania. It's been a challenge and a joy all wrapped up together with the continual underlying feeling of slight vulnerability… it's been brilliant.”

The trip so far has seen a variety of conditions; some days the duo made excellent progress - but on the edge of control - using the innovative sails designed by Pete. At other times it has been hard paddling, plugging away against wind, tide and mountainous swell running in from the Southern Ocean. Big waves nearly ended the trip when the paddling pair both went overboard, thrown out of their kayaks by breaking seas as they made their way past reefs and into the mouth of the Giblin River.

Pete described the moment he capsized: “There's that moment of truth when you know you are absolutely stuffed. No time to worry, just go with it and see what happens. I was conscious of a vertical wall engulfing the back of the boat and the next thing I know I am standing on my rudder pedals looking down the face of a big breaker and going over, pitch-poling. I didn't know which way up I was as the water pulled me in every direction at once - even under water it was noisy.”

Pete hung on to the kayak though and managed to make it into the river mouth. He was worried about Andy as he lost sight of him several times in the tumbling torrents of water: “There was just nothing I could do though; it was every man for himself.”

Although Andy had been swept onto rocks on the far side of the river, the pair managed to meet up and regroup. Despite a few bumps and bruises and losing some supplies, they were unscathed and able to continue their voyage. Pete even managed to grab his video camera and record a short piece while in the water.

Pete says it has been quite a challenge but a rewarding experience so far. The remote south western coast of the island may have brought an abundance of wildlife, but they went nine days without seeing another person and were completely out of communication range.

Now the canoeing colleagues are looking forward to making their way up the East coast and back to their starting point at Devonport, Tasmania, from where they left 25 days ago.

You can follow Pete’s progress through a live satellite tracker and read his daily blogs on his website at www.petegoss.com.