GOSS GETS UNDER WAY 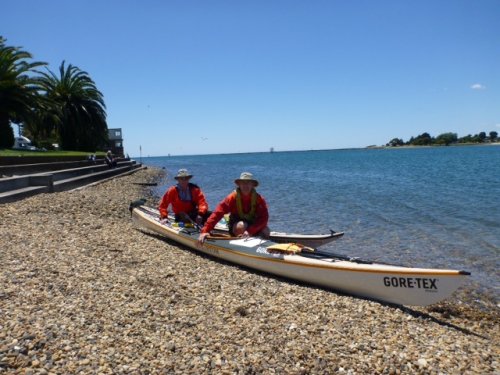 It has been a bumpy start for Pete Goss and Andy Warrender as they set off yesterday (Saturday 29th December) to complete their circumnavigation of Tasmania by sea kayak.

Strong headwinds, heavy kayaks and a broken rudder combined with jet lag to make especially tough paddling for the pair as they made their way along the coast from their starting point at Devonport, Tasmania.

Day one involved a delayed start as Pete’s kayak came out of the shipping container with a broken rudder. But after a repair and a quick kip they set off for the first time, with a short 20 kilometre hop along the coast battling 30kph headwinds.

With a second day’s distance now under their belt, they are settling into a routine and have now completed about 55 kilometres. So far, the coastline is pretty civilised and overnight stops have involved a real bed and solid roof, but as the terrain gets more remote it will be nights under canvas for the team. Carrying all their camping kit and food has made the kayaks heavier to paddle than expected, although Pete says that they handle perfectly despite the extra load.

A still jet-lagged and bleary-eyed Pete said: “It has been two years in the making and today it felt like the trip came to life. It’s a great feeling as we look forward to taking on and enjoying everything that Tasmania has to offer.”

Pete is enjoying being back on the water and also experiencing it in a way he hasn’t on previous adventures: “One has a very intimate relationship with the water on a kayak and, like meeting a new person, you have no idea what a new piece of water will be like.”

So far the weather has been reasonably kind, but there is a long way to go before the intrepid duo complete the 1500 kilometre voyage.

As with all Pete’s adventures, people can follow his progress on the website petegoss.com, where there is a live tracker, pictures, video posts and blog updates.