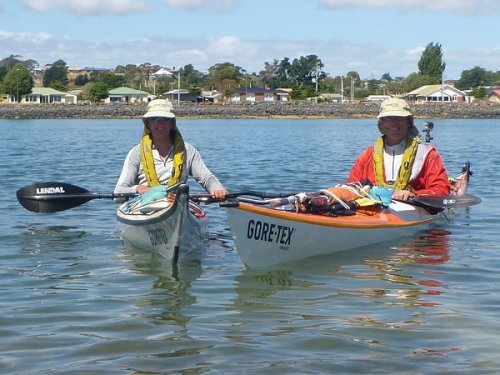 Pete Goss and Andy Warrender have completed their epic 1500 km circumnavigation of Tasmania by sea kayak after 50 days of adventure, and a bit of sailing, in a trip which saw a variety of weather and a wealth of wildlife.

The paddling pair battled the big swell of the Southern Ocean, were capsized by breakers as they came ashore and camped out in some remote and wild places. But the adventure also took in some amazing sights, white sandy beaches and crystal-clear waters, brought them close to rays, dolphins, albatross, wombats and kookaburra, and saw them sleeping under the stars.

Pete Goss MBE, 51, said that the trip has exceeded all expectations: “If I had to choose my favourite section it would be the west coast for it is wild, remote and one is always aware of the southern ocean. If I had to choose the most beautiful it would be the Freycinet Peninsula and for warmth, generosity and kindness I would have to embrace the whole Island for we have been made so welcome by all that we have come across. Tasmania is a very special place.”

Andy, 52, said this has been the culmination of a long term dream: “From a kayaker’s perspective Tasmania offers every variety of paddling possible from the challenging seas and swells of the southern ocean to idyllic, almost topical waters. It's been brilliant.”

While Andy and Pete predominantly used paddle-power, Pete had designed an innovative sailing rig for the kayaks to give them some wind assistance when conditions allowed. Pete said: “If technology from other disciplines and innovation can improve a design and make life easier, I say ‘why not’?”

The project was supported by the GORE-TEX® brand which provided the very latest in high-tech breathable and protective clothing, including bespoke drysuits. Andy Warrender was the business leader who guided GORE Fabrics to being a global leader in comfortable protective clothing. Pete and Andy have spent more time in their suits than their tents and wouldn't be without them for safety and comfort.

Pete always likes to open his adventures up to the public and thousands of people followed their progress on the live satellite tracker at petegoss.com and posted messages of support to keep the guys going.

But when asked what the hardest part of the trip was, Pete said: “The toughest times were … well, there weren't any; this was a great adventure and of course one had to work hard, but the truth is it was a joy from beginning to end. We are fitter, thinner and happier.”

As one adventure draws to a close people immediately start asking what’s next for Pete: more kayaking, another sailing adventure or something completely different. As always, Pete says there are some ideas in the pipeline, but for now, it is time to relax with the family and a cuppa.