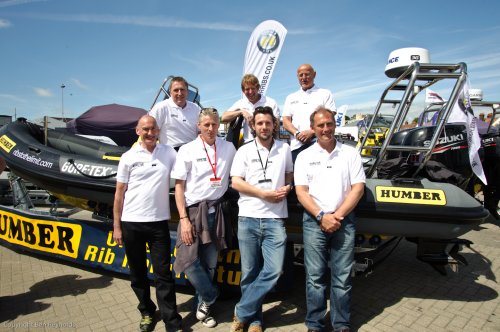 SAILOR Pete Goss MBE is making a foray into the world of offshore powerboating this summer as he takes part in a major RIB expedition.

The sailing hero will undertake his first major offshore RIB challenge as he takes part in the first ever GORE-TEX® Arctic Challenge.

He will travel from Scotland to the Arctic Circle in a tiny, six metre, Suzuki powered Humber RIB over the course of six days alongside a team of seven others.

It is the first time the route has been battled in such small RIBS and the team has taken on the challenge in a bid to prove the capability of the modern day RIB.

The gargantuan adventure was announced today (May 13) at RIBEX, the only boat show dedicated solely to rigid inflatable boats.

Speaking of his involvement in the challenge, Pete Goss said: “My first experience of RIBs was during my time with the Royal Marines and from that moment I was hooked. Having owned a couple of big RIBs for the Team Philips project, I’ve learned how capable these boats can be in testing ship to shore operations and also how much fun they can be of course!

“What I haven’t had the opportunity of experiencing until now, is their full offshore potential. The thrill of taking two small RIBs over 100 miles offshore is what drew me to the GORE-TEX® Arctic Challenge. It will be testing for sure, but immense fun too, plus the Humber 6m RIBs will make the perfect ‘vehicles’ for exploring the rugged Scottish coastlines, the fjords of Norway and the dramatic cliffs at truly close quarters.”

Organiser, Hugo Montgomery-Swan, added: “We seek to be modern-day footstep followers of the Vikings, amongst the greatest small-boat navigators to ever traverse the northern seas, as we endeavor in some small way, aboard our little craft, to aspire to their open-boat prowess and spirit of adventure.

“It is our hope that by using small RIBS, we can show that experiencing fresh horizons and undertaking offshore adventures should not just be a prerogative of owners of much larger craft. By travelling in small boats we will be much more connected with the environment, experiencing the wind in our faces just as those who traversed these seas once did over 1,000 years before.”

Over six days the group will have to battle against all that the North Sea can throw at them. The open vessels will offer little protection from the icy winds as they travel an average 120 miles per day at around 20 knots all the way to the Arctic. Their longest day will see them travel 230 nautical miles in a grueling 11.5 hour stint.

The team will be kept safe with top-of-the-range equipment while they traverse the icy conditions. Hugo says: “We are incredibly lucky to have THE GORE-TEX® brand as title sponsor. The GORE-TEX® clothing could literally prove a lifesaver if we are unfortunate enough to encounter a man-over-board situation. The Musto HPX dry-suits with GORE-TEX® Pro Shell Ocean Technology® are the most highly developed protective marine offshore clothing technology yet developed and we will be grateful for it when the cold arctic winds are blowing!”

For the first time for a challenge of this nature, people at home will be able to keep right up-to-date via onboard tracking technology that will feed to social media channels such as Twitter and Facebook, and the challenge website - www.ribstothelimit.com. The crew will feed video, photography and blog updates back from the thick of the action and will be able to answer any questions enthusiasts may have.

The crew will also document its findings of flora, fauna and sea life along the way, reporting information to the Net Gain Marine Conservation Zone Project. The study is actively seeking the alliance of mariners and boat owners operating in the area to assist in the gathering of information in relation to the ecology of the seas.

In a bid to keep the trip as green as possible the RIBs will travel at 20 knots. At this speed it is estimated that the engines will burn no more than about 30lph, an average of 180 litres of petrol (approx 40 gallons) a day. Similarly, the Suzuki engines have been specifically chosen for their energy efficiency.

To find out more about the GORE-TEX® Arctic Challenge and follow the adventure, which will take place between June 27 and July 9, visit www.ribstothelimit.com.

Photographs of the GORE-TEX® Arctic Challenge team at the launch will be sent to press following the photo call at 12 noon on May 13.

About W. L. Gore & Associates, Inc.
Gore is a leading manufacturer of thousands of advanced technology products for the electronics, fabrics, industrial and medical markets. Perhaps best known for its waterproof and breathable GORE-TEX® fabric, the company’s portfolio features a diverse array of innovations, including everything from guitar strings to life-saving cardiovascular devices. Gore is headquartered in Newark, Del., posts annual sales of $2.6 billion, and employs 9,000 associates in 30 countries worldwide. Visit www.gore-tex.com to learn more.