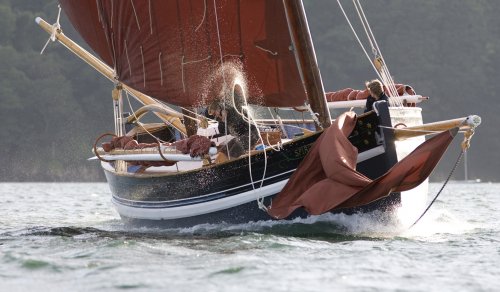 Despite a ferocious storm and large breaking seas in the Southern Ocean, Pete Goss and the crew of Spirit of Mystery say they are elated to have reached the halfway point between South Africa and Melbourne.

The long passage across the vast expanse of the Southern Ocean has so far seen its fair share of mixed weather, but it was as the little wooden lugger reached one of the most remote areas on Earth that the 37-foot-long vessel and the crew faced their toughest test to date.

Pete takes up the story: “It was mid morning before the storm decided to really show us what it had with a consistent 45-50 knots with gusts on top. The seas were steep, nasty and breaking, spume torn off the top adding vent to the driving rain as it bounced and tumbled across the ocean's surface. Two hours on watch left us numbed by the shear ferocity of the elements; our faces stinging from the needle-like spray, bodies aching from the physical effort. No matter how much we ate it just didn't seem to replenish that which was being burned.”

The adventure is very different to Pete’s previous sailing exploits, where the speed of his high-tech sailing yachts can be used to run before a storm or place the boat where it suits. Pete likened the 5-6 knots speed of Spirit of Mystery to a hedgehog crossing a busy motorway. “The most positive action available on hitting the fast lane is to shut your eyes and hope,” he said.

Despite being ‘dog tired’, Pete said the crew are elated at having crossed the halfway point to Melbourne, which they will toast with a dram of whisky from one of their sponsors. Pete said: “I am going to have double Talisker time tonight, one for the halfway point and one for Spirit of Mystery for being, as Captain Richard Nicholls of the original crew would often say; 'our Gallant little ship'.”

Celebrating crossing the halfway point on Valentine’s Day, thoughts on board have turned to being reunited with loved ones.

With 2,692NM to go and the storm behind them without damage or injury, Pete said that he felt able to calculate the approximate arrival date in Melbourne, which after much thought he is estimating will be around 10th March.

Updates will be given as the voyage progresses and people can follow Spirit of Mystery via Pete’s website which features a satellite tracking facility. Pete also writes an engaging daily blog from the boat, which can be seen on his website at petegoss.com.

Pete and the crew hope that as many people as possible will turn out to welcome them to Australia, including descendants of the original brave crew who sailed the wooden Mounts Bay lugger Mystery from Cornwall to Australia between November 1854 and March 1855.

Please note that interviews can be given via the satellite telephone with prior notice and where conditions allow. However, this is expensive for the project and so we would ask where possible that interviews are conducted by email and/or kept as short as possible. Please contact Stuart Elford on 07796 957677 or at stuartelford@btinternet.com