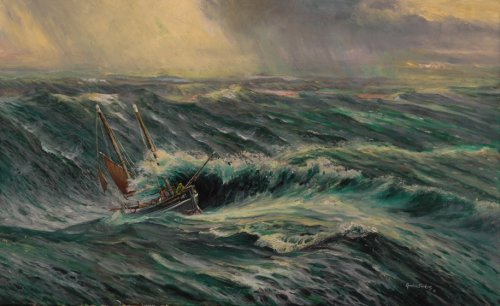 The renowned marine artist Gordon Frickers has produced a painting that captures the epic voyage made by Westcountry sailor and adventurer Pete Goss MBE in 2008-2009 in the 37-foot long wooden boat Spirit of Mystery.

Pete Goss built and sailed the 37’ Mounts Bay Lugger to Australia to commemorate the incredible voyage made by seven Cornishmen in 1854 aboard the original Mystery, the smallest migrant vessel ever to make the perilous journey to Australia.

Gordon Frickers, who is probably most famous for his painting ‘Roaring Forties’ depicting Robin Knox-Johnston aboard Suhaili in 1968 as he became the first man to single-handedly circumnavigate the globe non-stop, was captivated by the project and asked Pete if he could commit the voyage to canvas.

As a fan of ‘Roaring Forties’, Pete was intrigued and keen to follow the creative process, so he commissioned Gordon to produce the painting. After meeting Gordon and talking about the voyage and especially the Southern Ocean, Gordon set to work.

The result is a picture of Spirit of Mystery revealed in a way no camera could offer, labouring in huge waves with a vicious cross sea, truly reminiscent of Pete’s voyage and that of the original crew, whose Captain Richard Nicholls wrote in their log on 6th March 1855: “A terrific gale of wind – heaviest so far experienced. Our gallant little boat rides the mountains of sea remarkably well.”

Gordon said: “I have endeavoured to give our painting the qualities cameras and Photoshop don't have. Much of the scene is as abstract as possible, light, physical texture, because that is how it is in bad weather. I pursued feeling and emotion rather than detail. The colours and the white water are influenced by the ragged sky, the sort of patchy sunlight and flying spray Pete had described.”

Pete said he got exactly the painting he had hoped for: “I particularly like the vast underlying swell rolling off into the infinite space of the Southern Ocean coupled with the immediacy of the nasty cross sea that threatens to overwhelm the boat. Gordon has a rare talent and has captured what is so hard to describe. When I first got the painting I put it on the kitchen table, made myself a cup of tea and lost myself in it for half an hour.”

Gordon said he knew intuitively that painting for Pete Goss would be a rare and special experience to savour, adding: “I can think of few greater compliments for an artist than to have people who have been there, done it and got the T shirt to endorse my art work.”

The oil on canvas painting measures 30” by 48” and will be framed in the same oak used to build Spirit of Mystery.
“Spirit of Mystery in the Southern Ocean” is now available as a signed numbered print, with a limited number signed by Pete Goss; to see the print visit http://gordonfrickers.wix.com/petegossprint or to make an order visit www.frickers.co.uk/art, payment page.

About Gordon Frickers:
Gordon Frickers is one of the few artists to be invited, and the first and only marine artist to exhibit at, the European Parliament, Brussels (May 2011).

Gordon Frickers has been the choice of many diverse & renowned organizations including Yamaha, British Telecom, the Ministry of Defence, Corum, Calmac and Deloitte & Touché.